Hedge Fund Specialist: GOLD is Back! 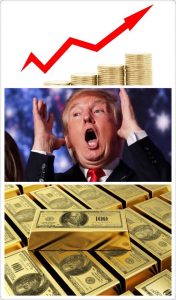 ” Gold and the companies that produce it were back in favor with fund managers last quarter, when the metal posted the best quarterly performance in a year.” said Luzi Ann Javier in the “Hedge funds return to gold in Q1”  published on PressReader May 17th,2017.  “Investor returned to bullion and gold miners as they dialed back expectations of faster U.S. economic growth amid concerns about U.S. President Donald Trump’s ability to push his pro-growth policies through Congress. In February, hedge-fund manager David Eihorn said he’s betting on declines in government debt and a rebound in gold to guard against the risk of inflation under Trump. Druckenmiller said in the same month that he bought gold in lade December and January, reversing the sale he made after the U.S. presidential election. Even on May 2, when the bullion rally was slowing, DoubleLine Capital LP CEO Jeffrey Gundlach said ‘ it is note the time to give up on gold’ , adding that prices are likely to head higher.” ( Javier 2017)

Many hedge fund specialists share the same idea during this time that Gold, which has been down for such a long time, is quietly, slowly but surely coming back.

Our bullion specialists suggest that  it’s important to build your own personal hedge against inflation and uncertainty and protect your wealth.