A classic definition of money has three parts:  medium of exchange, store of value and unit of account.  If all three of those criteria are met, you have money of sorts.

The use of gold as money is not only ancient but eminently practical.  Andrea Stella, Professor of chemistry at University College London, provided and in debt review of the periodic table of the elements to explain why gold, among all the atomic structure in the known universe, is uniquely and ideally suited to be money in the physical world.

Once you complete the process of elimination, there are only eight candidates for use as money.  These are the so-called noble metals, situated about in the center of the (Periodic) table, consisting of iridium, osmium, ruthenium, platinum, palladium, rhodium, silver and gold.  All of these are rare.  Still only silver and gold are available in sufficient quantities to comprise a practical money supply.  The rest are extremely rare, too rare to be money, and difficult to extract because of very high melting points.

Both are scarce but not impossibly rare. Both also have

a relatively low melting point and are therefore easy to

reacts to minute amounts of sulphur in the air.  That’s

why we place particular value on gold.”

It turns out gold (Au) has one final attraction—it’s golden.  All of the other metals are silvery in color, except copper, which turns green when exposed to air.   Beauty is not a prerequisite for money.  Still,  it’s a nice attribute for gold considering it passes every other test with flying colours.

Our ancestors did not use gold just because it was shiny or beautiful as modern critics suggest. Gold is the only element that has all the requisite physical characteristics—scarcity, malleability, inertness and uniformity—to serve as a reliable and practical physical store of value.  Wiser society than ours knew what they were doing.

Gold is money.  Despite disparagement by policy makers and economists, it will remain as a store of wealth par excellence, and continue to play an integral part in the world’s monetary system.  In part we can thank the French, who took a stand at the IMF in 1975 and insisted on a role for gold in official reserves even when it was no longer a monetary reference point at the time.

An excerpt from New York Times bestselling Author of THE NEW CASE FOR GOLD;

Gold has always played an important role in the international monetary system. Gold coins were first struck on the order of King Croesus of Lydia (an area that is now part of Turkey), around 550 BC. They circulated as currency in many countries before the introduction of paper money.

A child finds a shiny rock in a creek, thousands of years ago, and the human race is introduced to gold for the first time.

Gold became a part of every human culture. Its brilliance, natural beauty, and luster, and its great malleability and resistance to tarnish made it enjoyable to work and play with. 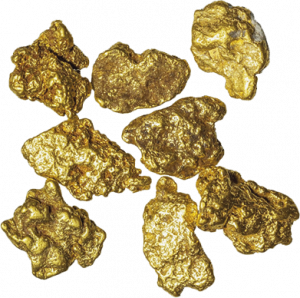 Gold nuggets found in the Yukon

As far back as 3100 B.C., we have evidence of a gold/silver value ratio in the code of Menes, the founder of the first Egyptian dynasty. In this code it is stated that “one part of gold is equal to two and one half parts of silver in value.” This is our earliest of a value relationship between gold and silver.

Because gold is dispersed widely throughout the geologic world, its discovery occurred to many different groups in many different locales. And nearly everyone who found it was impressed with it, and so was the developing culture in which they lived.

Gold was the first metal widely known to our species. When thinking about the historical progress of technology, we consider the development of iron and copper-working as the greatest contributions to our species’ economic and cultural progress – but gold came first.

Gold is the easiest of the metals to work. It occurs in a virtually pure and workable state, whereas most other metals tend to be found in ore-bodies that pose some difficulty in smelting. Gold’s early uses were no doubt ornamental, and its brilliance and permanence (it neither corrodes nor tarnishes) linked it to deities and royalty in early civilizations. 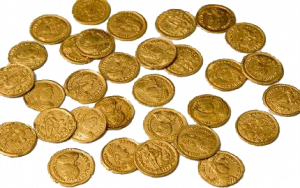 Gold has always been powerful stuff. The earliest history of human interaction with gold is long lost to us, but its association with the gods, with immortality, and with wealth itself are common to many cultures throughout the world.

The “Gold of Troy” treasure hoard, excavated in Turkey and dating to the era 2450 -2600 B.C., show the range of gold-work from delicate jewelry to a gold gravy boat weighing a full troy pound. This was a time when gold was highly valued, but had not yet become money itself. Rather, it was owned by the powerful and well-connected, or made into objects of worship, or used to decorate sacred locations.

Gold has always had value to humans, even before it was money. This is demonstrated by the extraordinary efforts made to obtain it. Prospecting for gold was a worldwide effort going back thousands of years, even before the first money in the form of gold coins appeared about 700 B.C.

In the quest for gold by the Phoenicians, Egyptians, Indians, Hittites, Chinese, and others, prisoners of war were sent to work the mines, as were slaves and criminals. And this happened during a time when gold had no value as ‘money,’ but was just considered a desirable commodity in and of itself.

The ‘value’ of gold was accepted all over the world. Today, as in ancient times, the intrinsic appeal of gold itself has that universal appeal to humans. But how did gold come to be a commodity, a measurable unit of value?

Gold, measured out, became money. Gold’s beauty, scarcity, unique density (no other metal outside the platinum group is as heavy), and the ease by which it could be melted, formed, and measured made it a natural trading medium. Gold gave rise to the concept of money itself: portable, private, and permanent. Gold (and silver) in standardized coins came to replace barter arrangements, and made trade in the Classic period much easier.

Gold was money in ancient Greece. The Greeks mined for gold throughout the Mediterranean and Middle East regions by 550 B.C., and both Plato and Aristotle wrote about gold and had theories about its origins. Gold was associated with water (logical, since most of it was found in streams), and it was supposed that gold was a particularly dense combination of water and sunlight.

The first use of gold as money occurred around 700 B.C., when Lydian merchants produced the first coins. These were simply stamped lumps of a 63% gold and 27% silver mixture known as ‘electrum.’ This standardized unit of value no doubt helped Lydian traders in their wide-ranging successes, for by the time of Croesus of Mermnadae, the last King of Lydia (570 -546 B.C.), Lydia had amassed a huge hoard of gold. Today, we still speak of the ultra-wealthy as being ‘rich as Croesus.’

Please Share This
Related Posts
“The New Case for Gold” – by James Rickards
June 20, 2016 We are proud to announce that WWPMC made James Rickards’ new bestselling…
Five Years that Changed Silver Forever
Ask any casual observer of the silver market what happened to the metal over the…
The Worthless Dollar
Since 1913, 97% of the US dollar’s purchasing power has been in decline. In fact,…
Recent Posts
Recent Comments
Archives
Categories
Meta